Dr. I. Kalpokas: Creativity and Limitation in Political Communities

On the 13th of April LCC International University Assistant Professor Dr. Ignas Kalpokas will present a lecture on his recently published book „Creativity and Limitation in Political Communities: Spinoza, Schmitt and Ordering“ and his current book project „A Political Theory of Post-truth“.

With anti-establishment sentiment on the rise across Western democracies, exploring the underpinnings of an inherent tension between popular and establishment powers in political communities and rethinking theories of political life within states is of paramount importance.

By combining the theories of Carl Schmitt and Benedict Spinoza, Dr. I. Kalpokas developes a framework of continuous reproduction, whereby the two powers simultaneously hold one another in tension and supersede one another.

As a third step, this approach is applied to the present condition, increasingly dominated by post-truth. In such an environment, distinctions between truth and falsehood become increasingly irrelevant, and therefore mobilisation, either under a creative or a limiting thrust, becomes the key variable in political life. 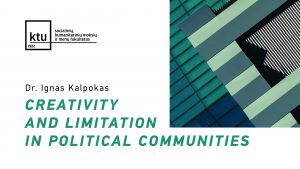